We all know the saying “One bad apple can spoil the bunch”; well one mussel-infested boat can devastate a province! It was a close call for BC waterways last week when a boat carrying zebra mussels was detected and decontaminated in Kelowna by one of six provincial Conservation Officer Service roving boat inspection crews.

“If invasive mussels take hold in British Columbia the consequences would be catastrophic on many levels: ecological, industrial, and recreational,” states Graham Wheating, Compliance and Enforcement Officer with the Ministry of Environment. 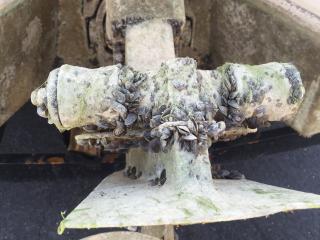 Three of these units and crews, costing $360,000, were made possible thanks to additional funding from the Columbia Basin Trust, Fortis BC and Columbia Power Corporation. Although the cost of prevention may seem high, it is much less then if the mussels reach BC; the estimated cost to the province if zebra and quagga mussels were to enter BC lakes and rivers would be in the tens of millions per year.

Did you know that new legislation makes it mandatory for anyone carrying a watercraft (boats, kayaks, canoes, stand up paddle boards, etc.) to stop at a watercraft inspection station within the province of BC? The Nelson based inspection crew has been conducting roving mandatory inspections from Midway to Creston and has inspected 640 watercraft to date. Out of these, 4 boats were considered high risk, meaning the boats travelled from provinces and states with known zebra and quagga mussel infestations.

In addition to the provincial mandatory watercraft inspection stations, we (CKISS) have been monitoring lakes and rivers in the region since 2012 for zebra and quagga mussels. “We currently have 28 sampling sites at various locations including Kootenay Lake, Arrow Lake, Slocan Lake, the Columbia River, and Pend D’Oreille River,” states CKISS Aquatic Invasive Species Program Coordinator Khaylish Fraser. “This program, funded by the Fish and Wildlife Compensation Program and Columbia Power Corporation, supports the existing provincial invasive mussel-monitoring program.  The need for such a program exists as the majority of lakes and reservoirs in BC have been assigned a medium-high risk status for introduction and establishment of zebra and quagga mussels.  Monitoring is critical for early detection.”

3 Steps YOU can do to stop the spread of Aquatic Invasive Species:

For addtional information on how to take action on the water click here.