It is estimated that in the eastern states and provinces over six–million bats have been killed by, an invasive fungus called white-nose syndrome (WNS). The fungus invades bats that are hibernating, causing the bats to wake up early, which in turn depletes their fat reserves, creates dehydration and eventually causes death.

On 31st March 2016, Washington Department of Fish and Wildlife confirmed that White-Nose Syndrome had been detected on a dead bat near Seattle, Washington. This is very worrisome for the health of bat populations in British Columbia. The BC Community Bat Program in collaboration with BC government and Wildlife Conservation Society Canada is developing a rapid response to this emerging crisis.

“We knew this deadly fungus that kills bats was moving westward across North America” says Juliet Craig, former Coordinator of the Kootenay Community Bat Project (KCBP) and BC Community Bat Program, “but we thought we had many years to prepare”. 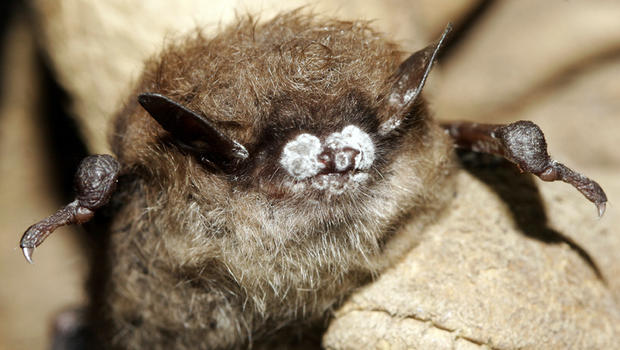 Currently there are no known treatments for White Nose Syndrome that can be used to save bats in the wild. However, mitigating other threats to bat populations and preserving and restoring bat habitat may provide bat populations the resilience to rebound from the mortality that may be caused by the disease. This is where the KCBP and the general public can help.

“Although White-Nose Syndrome affects bats in caves, it will be during springtime when bats return to building roosts that we have our best chance at detecting the presence of the disease, making the work of our community bat program more important than ever before” continues Craig.

The Ministry of Environment has contracted the BC Community Bat Program to collect dead bats for White-nose Syndrome testing. The typical first sign of this disease is bats flying during the winter, an unusual sighting at a time of year when bats are hibernating. Another sign of the presence of WNS is the appearance of dead bats as they succumb to the effects of WNS. In the Kootenay region, please report dead bats, and bats flying in winter, to the Kootenay Community Bat Program (email kootenay@bcbats.ca or call 1-855-922-2287 ext. 14 or see www.bcbats.ca for details).

“We are asking the public to report dead bats to the toll-free phone number or email  and to also provide information on bat roosts. Bat carcasses will be submitted for testing of White-Nose Syndrome and may provide the earliest indication of the presence of the disease in BC” says Craig.

If you find a dead bat, be sure not to touch it with your bare hands. Collect it in a bag and label the bag with the date, location and your name, and then put the bag in the freezer. Contact the KCBP as soon as possible for shipping directions and further information.

The KCBP also encourages residents to report bat roosting sites in building structures, such as attics, sheds and bat houses, to help identify where certain species are present; if you are needing to evict bats from a structure, you are encouraged to contact the KCBP who can provide information on proper procedures to follow.

To find out more about white-nose syndrome read these stories: