Over the past two years CKISS has been working on a restoration project at Summit Lake Provincial Park. It began during the summer of 2017 when our hard working summer students mechanically removed invasive burdock located at the entrance of the park.

Burdock Removal, Before & After

Common burdock (arctium minus) is an invasive plant that is best known for its clinging burs that are difficult to remove when they are tangled onto your clothing, pet’s fur or livestock. The introduced plant lacks any natural predators to keep it at bay. Its large leaves can shade out smaller plants and cause a loss in biodiversity. There have been instances where small birds and bats become entangled in the burs causing death.

Burdock removal continued in 2018 when CKISS coordinated two community weed pulls. The first event took place on May 30, 2018 when grade five and six students from Nakusp Elementary School came to the park to help us beat back the burdock.

The other community weed pull took place during the popular Toadfest event hosted by the Fish and Wildlife Compensation Program. CKISS staff, board members and volunteers got their hands dirty in order to assist with restoration efforts. Volunteers were instructed to hand dig the burdock rosettes, taproot and all! All removed plant material was placed in clear bags and brought to the landfill for free. Did you know that all landfills within the RDCK and RDKB accept invasive plant species for free? A native seed mix consisting of bunch grasses and yarrow were then spread over the disturbed soil. 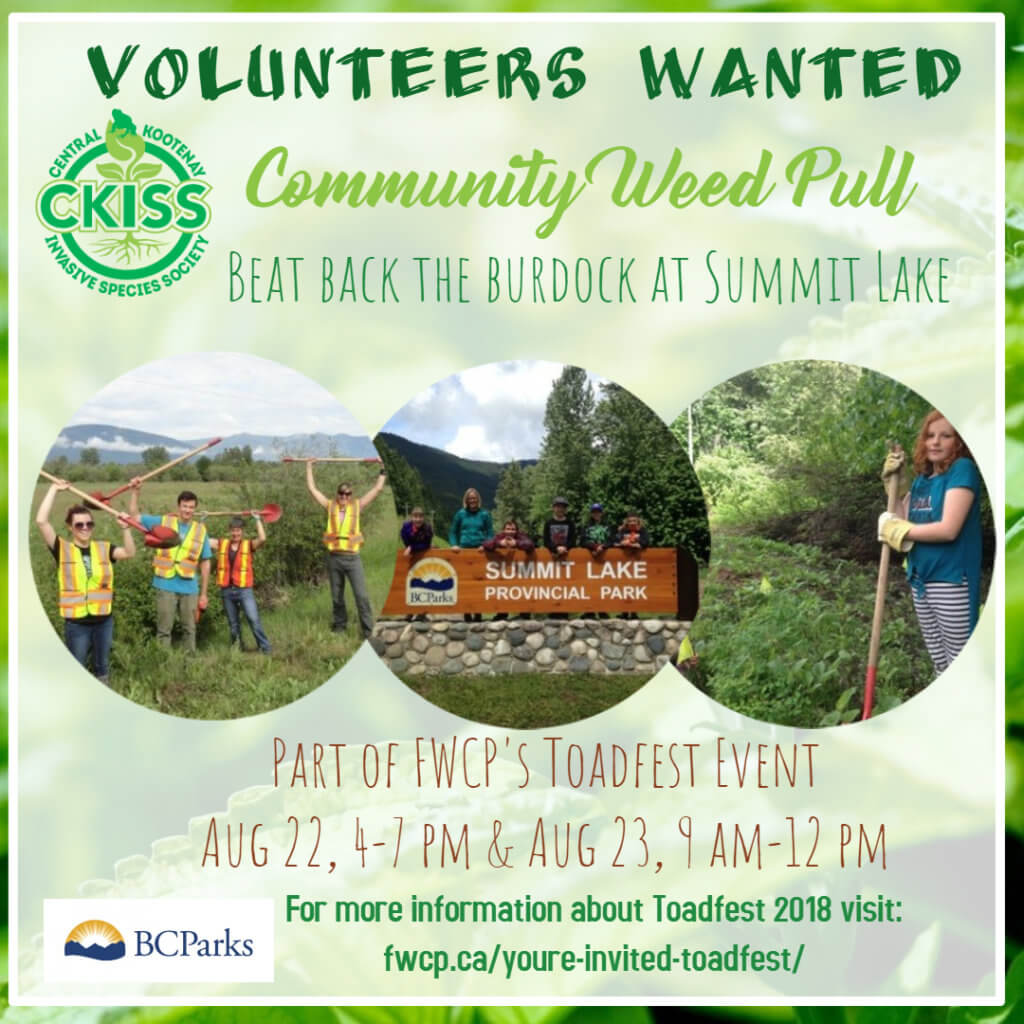 What Native Species did we Plant at Summit Lake?

In 2017, CKISS staff and volunteers planted the following species at the site,

CKISS staff  conducted a site visit on May 30, 2018 and were pleased to see that the native species were thriving! All of the native species that were planted in 2017 , minus one kinnikinnick, survived over the winter months. There was an abundance of native grasses and yarrow growing as a result of seeding efforts in 2017. BC Parks staff were vital in keeping these plants alive by, hand watering the site after it was planted and seeded in 2017.

The site was assessed again on July 17, 2018 by CKISS Education Program Coordinator, Laurie Frankcom and Plant Ecologist, Evan McKenzie. It was observed that native species were still thriving, however, common burdock rosettes were still present on the site, especially in shady areas. Evan conducted soil samples on site; he found that the soil at the restoration site indicated a mesic (average) soil moisture regime and is nutrient-rich. After the site visit, Evan provided CKISS, with a report that offered guidance on native species selection and planting locations.

On October 1, 2018 the CKISS led a field trip for Grade 5 and 6 students from Nakusp Elementary School at the park. Every student had a chance to assist with restoration efforts by planting native species, removing burdock rosettes and spreading native seed.

This project is far from over! We are currently in the process of securing additional funding for this restoration endeavor.

Thank You for Your Support!

This Project is funded by:

The Fish and Wildlife Compensation Program (FWCP), the FWCP is partnership between BC Hydro, the Province of B.C., Fisheries and Oceans Canada, First Nations and public stakeholders to conserve and enhance fish and wildlife in watersheds impacted by BC Hydro dams.

We gratefully acknowledge the financial support of the Province of British Columbia through BC Parks.

This project was undertaken with the financial support of the Government of Canada.
Ce projet a été réalisé avec l’appui financier du gouvernement du Canada.