Restoration efforts at the Snk’mip Marsh continued this field season. Ponds were created, native shrubs and trees were planted and invasive weeds like orange hawkweed were removed.

CKISS began collaborating with the Valhalla Foundation for Ecology (VFE) on this project in 2018 when we hosted a community weed pull as part of VFE’s Opening Ceremonies Event. In 2019, CKISS organized a field trip for local students from Lucerne School, who assisted with restoration efforts by planting a variety of native shrubs, plants and trees at a newly built wetland pond. In addition the students learned about the ecological and cultural value of the native species that they planted. 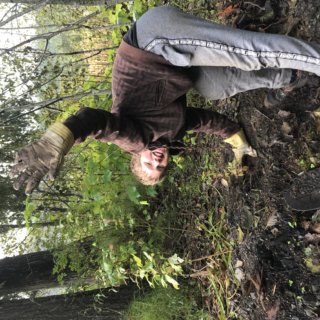 Students having a blast planting native shrubs and trees at the wetland. 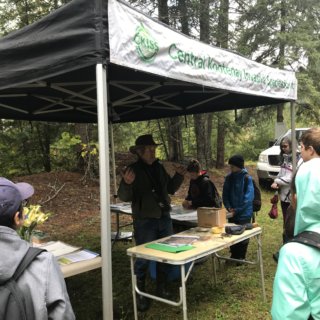 Wayne McCrory a wildlife biologist and Chair of the Valhalla Foundation for Ecology shares his knowledge of the area with students. 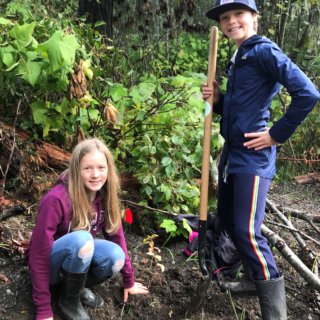 Students getting hands on experience in wetland rehab!

In 2020 we monitored the regrowth of those trees and shrubs assisted with a weed pull event. This past fall we were happy to coordinate community volunteers and students from Lucerne School in New Denver who  helped us plant over 400 native plants!

The Snk’mip Marsh Santuary is a 17.4 hectare wetland located at the north end of Slocan Lake. The wetland is a vital aquatic and riparian ecosystem because it is an important stopover for migrating birds, it is home to many species at risk, it is important for water filtration and flood control, and it acts as a carbon sink. The area is important to locals and tourists alike as a location for bird-watching, nature appreciation, environmental education, and recreation.

After many years of industrial use, the site was purchased by VFE in 2017. They have been working to return the site to its previous state as a healthy wetland.

Much of the restoration work has involved using heavy equipment to loosen compacted soil, create shallow ponds and install pieces of coarse woody debris. While this work will have ecological benefits to the wetland, the soil disturbance creates perfect conditions for invasive species to thrive.

CKISS and VFE are monitoring the site closely and have been removing invasive species like spotted knapweed and orange hawkweed from the site over the past couple of years. 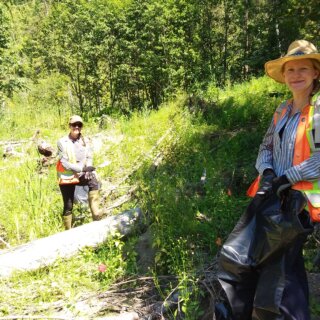 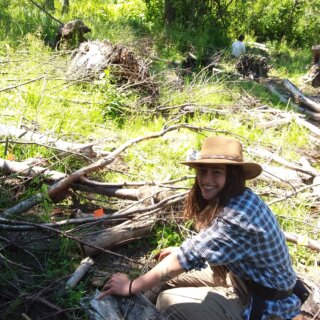 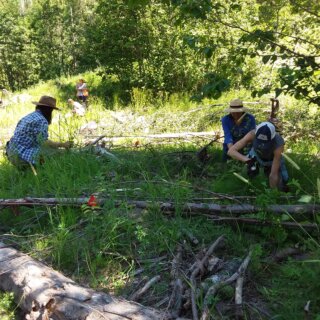 We have also been planting native species around the new ponds. These plants will outcompete invasive species, provide soil stability, help outcompete invasive species and encourage biodiversity. 250 native plants were planted on the site in 2019, and this year over 400 were planted! This accomplishment was made possible with the help of some amazing community volunteers, and students from Lucerne School in New Denver.

Community volunteers wowed us with their planting skills!

On September 22, eight volunteers from the community joined us and VFE staff to do some planting around a newly created pond. These volunteers were super efficient; the bare soil was quickly covered in tiny native plants! We are so grateful to the amazing volunteers who took time out of their week to help with this important project! 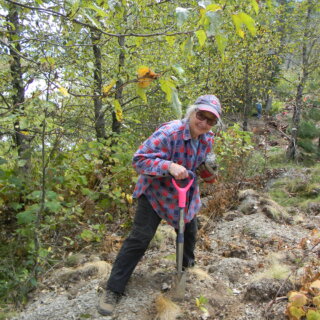 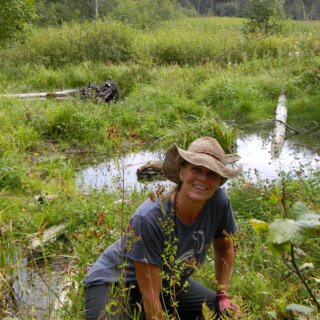 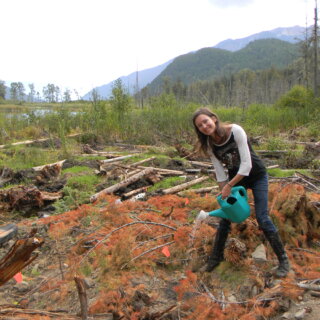 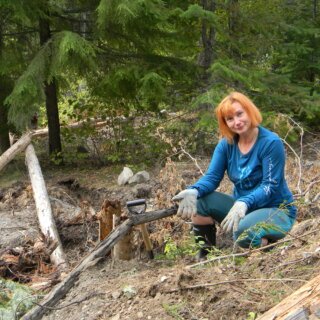 Students helped out, and learned more about invasive species and biodiversity

On September 24th, students in Grade 4-7 visited Snk’Mip. They enjoyed a scavenger hunt, tour of the wetlands and other educational activities. The students helped us to complete the native species planting, and we were so impressed with their work ethic. By the end of the day, all of the native plants had new homes.

It was a rainy day, but the students were prepared for the weather and weren’t afraid to get muddy! We were even able to spot some ducks and frogs enjoying the wetland. 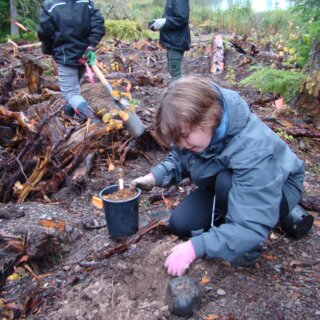 We got a helping hand in planting 400 native plugs at the Marsh from a local school in New Denver. 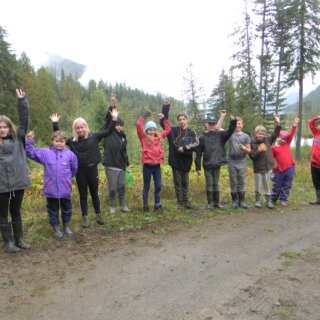 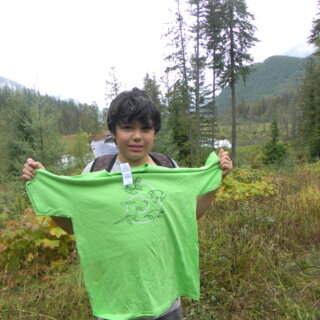 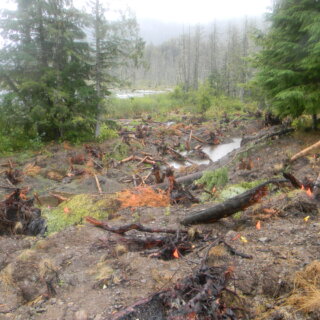 We planted many different species at Snk’mip this fall. Our species were chosen based on several factors, including cultural and ecological value.
Snk’mip is on Sinixt territory (Snk’mip is the Sinixt word for “head of the lake”). Therefore, consultation with a local Sinixt spokesperson has influenced the list of species planted. Notably, beaked hazelnut (Corylus cornuta) is a food which is traditionally harvested in this area. Planting this species on the site will facilitate the continuation of this practice.

Biologists recommended species that would benefit wildlife at Snk’mip. Red-osier dogwood (Cornus stolonifera) was chosen as it provides food for moose and deer. The dogwood flowers feed beneficial pollinators and grouse like to eat the berries. The low, dense growth creates shady hiding places for reptiles and amphibians.

Wetland restoration experts were also consulted. Black cottonwood (Populus balsamifera) was selected for its fast growth, this will help to quickly stabilize the soil and create shade. Mature cottonwoods create great wildlife trees which can benefit birds, insects and bats. 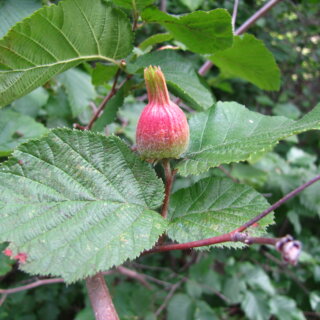 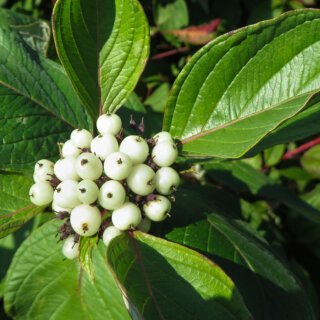 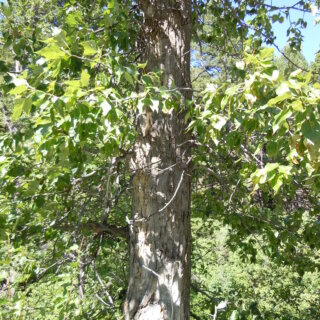 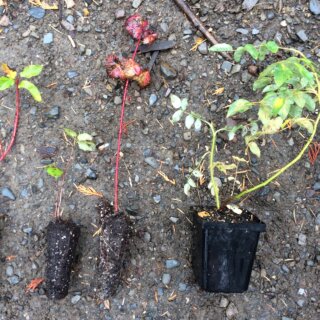 This multi-year project is far from over. Next year, CKISS staff will revisit the site to check on the plants. Students and volunteers placed a brightly coloured flag beside each plant that they planted. These flags will help us to find the plants next year, so we ask the public to NOT remove the flags. Leave that task to CKISS staf!

Earlier this summer, CKISS staff checked on the plants which were planted last year. Most of them were doing very well!

It has been such a pleasure to work at Snk’mip and collaborate with VFE, our wonderful volunteers and the Lucerne School students. The progress that has been made in restoring this site is very exciting and we look forward to seeing the new wetlands come alive next spring!

This project was made possible by funding from Environment Canada’s Eco Action Community Funding Program and Columbia Basin Trust.