Nelson, BC – Japanese knotweed is listed by the International Union for Conservation of Nature as one of the world’s 100 worst invasive species. Knotweed is among the highest priority plants to be eradicated for the Province of BC and the Central Kootenay Invasive Species Society (CKISS).

There are four species of knotweed found in BC – Japanese, Giant, Himalayan, and Bohemian. These plants are native to eastern Asia and introduced to North America as a decorative garden shrub in the 1800s. Often mistaken for bamboo, this tall and pretty plant is fast-growing (6 cm per day) and requires minimal care.  However, the extensive root system can damage concrete walls, pavement, bridge, and building foundations, drainage works, and flood prevention structures, resulting in expensive problems for both the City and private landowners. When the plant spreads into riparian areas, it reduces valuable habitat and causes erosion and sedimentation, which impacts both terrestrial and aquatic ecosystems.

The City’s Official Community Plan identifies the removal of invasive species as a goal.  The City of Nelson will begin a knotweed eradication program on public lands in the coming days.  The City has partnered with CKISS to identify priority locations and incorporate best management practices utilized in other jurisdictions for knotweed control.

Knotweed is notoriously difficult to eradicate, and studies around the world have repeatedly shown that mechanical efforts such as cutting, digging, smothering, or burning are ineffective and can contribute to its spread.  As a result, the City’s treatment plan will involve spot-application of a selected non-glyphosate herbicide by a licensed contractor, as recommended by current best practices.  Treated sites will have clear signage during the application process and for two weeks following. The public is encouraged to avoid contacting the treated plants for at least 12-hours. 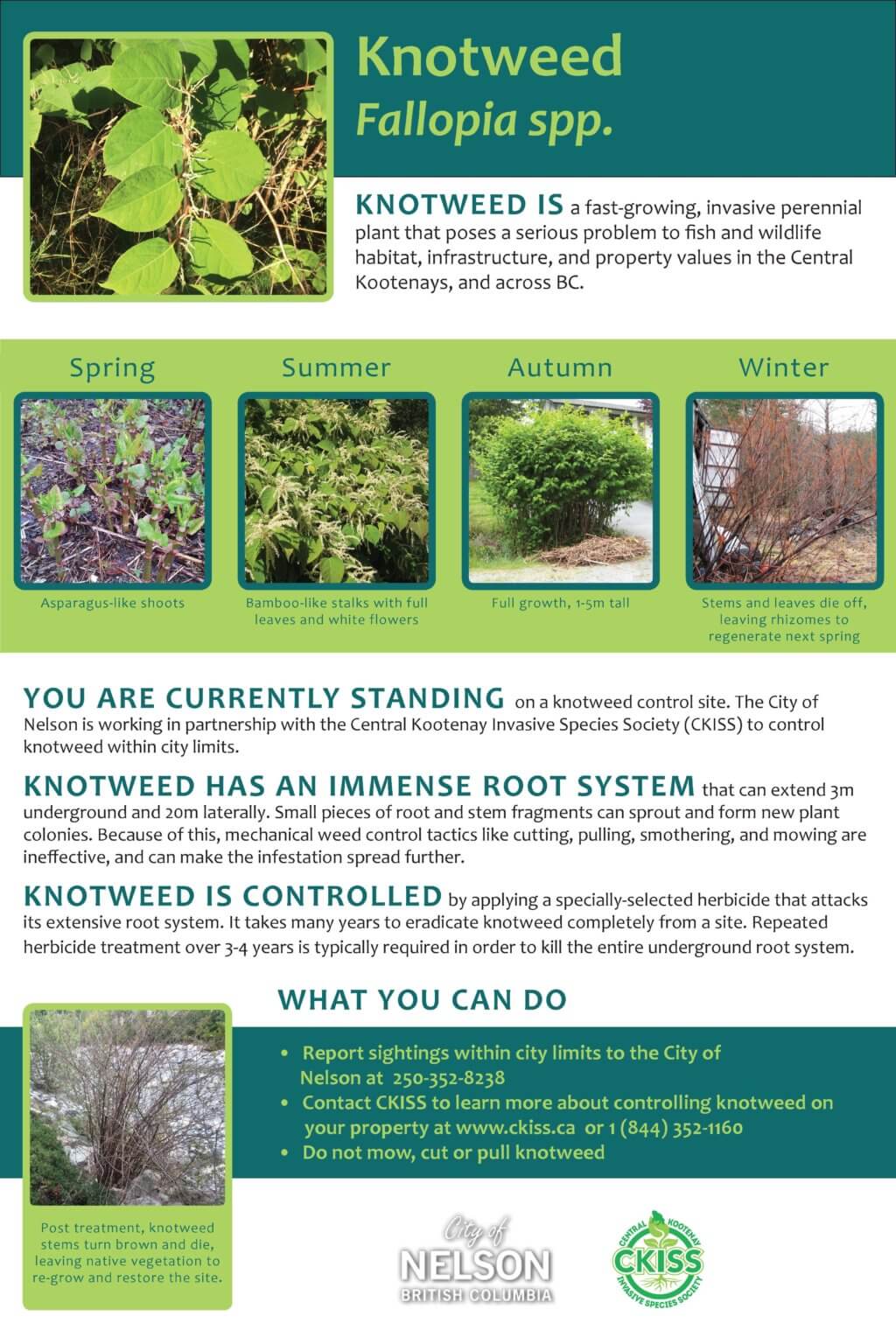 The City hopes to lead the way in eradicating knotweed in Nelson and encourages residents who have the plant on their property to follow suit and make every effort to remove or contain it to prevent further damage. To learn more about knotweed and its removal, visit: https://ckiss.ca/species/invasive-knotweeds/

The tentative schedule to apply the applications to the knotweed on City lands is during the first week of October, depending on the weather.   There are three sites identified, with two being near Lakeside Park and one behind the Curling Club. All three affected sites will have signage.

For more details on the City of Nelson’s knotweed efforts or to report knotweed within City limits, please contact Nelson Public Works, 250-352-8238.